East-John Youth Center, Incorporated, a 501(c) (3) organization, was founded in 1984 to provide youth with opportunities for recreational, educational, cultural, and spiritual development. The vision for the center was conceptualized by its founder, the late Rev. Mervin C. Gray when he came up with the idea of converting the old parsonage into a recreational center for youth.  A board of directors was created and the East-John Youth Center became incorporated on March 12, 1984. One year later March 1985 the center became a non-profit 501(c) (3) organization. The parsonage was renovated with siding and commercial kitchen was installed. The two pools and bathhouse were constructed with the help of local volunteers. In May of 1985 the East-John Youth Center, Inc., officially opened. That first summer (1985) a bus provided transportation for the children to enjoy the new pool and snack bar during the hot summer days.

1989 – Rev. Burton Mack became pastor of the Lusby Charge and under his tenure, programs for drug prevention, the Mack-A-Doo Club (Brenda Mack, coordinator), computer lab was installed, the East-John Auxiliary was formed, and a new basketball court was added. William Moore was the president of the board of directors. Sybol Cook was the program director. East-John became an affiliated United Way agency in 1991.

1993 – Rev. Samson Y. Nortey became the new pastor of the Lusby Charge. Under his tenure new pavilion was built and picnic tables were donated by Victor Stanley Company. The nature trail was cleared by the Methodist Men’s Ministry which was coordinated by Irvin Beverly. In 2002 a new addition – multi-purpose room was added on to the existing building. Tables, chairs, and gaming equipment was purchased for the new room. Also a facility user policy was formulated by the Lusby Charge. Presidents of the Board of Directors 1993 to present: Ronald Clark, Sr., Miracle Jacks, and Francine Clark. Program Directors: Sybol Cook, Francine Clark, Nancy Smith, and George Reid. Past summer camp directors were Mable Dowell, Denise Kent, and Louvenia Banks.

2013-2016 Rev. Marvin Wamble had the vision to feed the hungry in our community.  With that, More Tasty Blessings Community Kitchen was birthed in August 2015 with a partnership with Solomons UMC, volunteers feed members of the community each week.  In winter months, bags of food are distributed to those in need.   East-John is also used as a pick up location for a community food drop consisting of fresh produce and other commodities donated from Maryland Food Bank and Farming for hunger.

The East-John Youth Center and its programs continue to impact the lives of thousands of youth and adults in the Southern Maryland area by providing a safe environment conducive to learning, growing, and having fun. 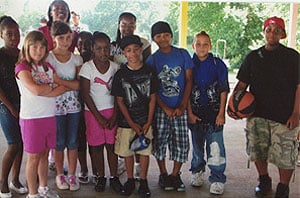 Due to COVID-19 our Homework Center hours are being adjusted.